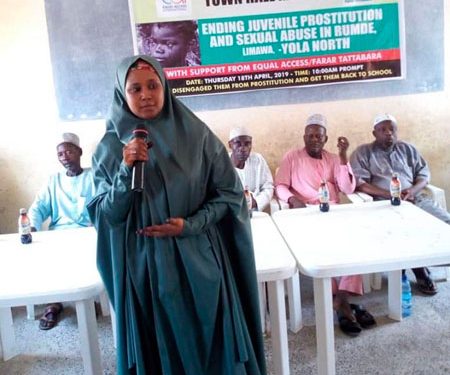 Rabi left her father’s house in Sangere, a suburb of Yola South Local Government Area (LGA) and took a Keke NAPEP to Rumde, another suburb in Yola North LGA where her mother hails from.

She had little else in mind that day other than a man who would have her for at least N2000. She needed the money urgently to settle a debt. So, on arriving at Rumde, she told a man, Auwalu, who had often found a man for her. Auwalu rose to the occasion and got not one but two men.

She, Auwalu and the two other men came to an agreement: Auwalu and the other two men would sleep with her over the night for the N2000 that she needed. They did just that.

But Rabi could not cope with the result. She came down with pain and then complained to her brother who raised the alarm to what had happened. And it became public knowledge, as some youths of the area amplified it. “Three men have raped a girl,” they shouted.

A rights activist, Hauwa Garba, who took the matter from there, told journalists, “I was alerted to voices of youths saying a girl had been gang-raped. I went out to identify the person and to rescue her.”

Hauwa, who operates under the auspices of Equal Access Nigeria, added that she soon found the rape case not to be as straightforward as she first thought.

“It’s a bad case to prosecute as rape because she agreed to the men sleeping with her for N2000,” she explained.

What first fired Hauwa’s passion, and the passion of the angry youths who shouted ‘rape’, in the first place, was Rabi’s age: 14 years.

So, Hauwa started out with zeal, determined to prosecute the three men for rape. She recalled, “I called my organisation and I was asked to go ahead. Even after I found out the weakness of the case, I felt that although she took herself to that place, at 14 she is a young girl. I equally felt that she took herself to a man because she needed money, but she ended up being used by three men, just for N2000.”

Facts that emerged, however, progressively dampened her spirit. It started with a revelation that the teenager was a regular street girl.

“After my own investigation, I became convinced that such thing was not new to her. I discovered from investigation that she is in juvenile prostitution. I found that  she had her agent among the three men. The agent had been connecting her with men periodically for money,” Hauwa said.

She added that Rabi was just one of the many teenage prostitutes operating in Yola suburbs.

“I have realised, after a survey, that many girls around her age, teenagers between the ages of 14 and 17, are into prostitution in some of these communities,” she said.

She is disturbed that Rabi had gone so deep into it that she is unrepentant. She said, “As we talk, she is back to her ways. She is not regretting what has happened. She does not even want to see me. For her, it’s like, why is this woman disturbing me?”

As often happens with rape cases, Rabi’s family does not want police or court process, and so Hauwa cannot try to prosecute the three men in Rabi’s case.

She explains her next line of action in these words: “I now tell myself to take juvenile prostitution as a project and do a campaign against it. I want to take enlightenment to the girls and to other members of the society. I have already called Town Hall meetings attended by people and leaders of the community, Rumde. People have to be sensitised to the evil of what happened.

“Ignorance is a factor. The fact of the girl being a minor is not sufficiently recognized by the three perpetrators and even the girl herself. I fear that if she continues in her acts, it’s dangerous. She is just 14. What will happen if she continues till she is 20? Will she be able to ever get out of it? So, I want to see how I can rehabilitate her and to enlighten other girls on the dangers of prostitution that they take as a life style. I have selected eight of the girls already from Rumde.”

A woman got sentenced to 5 years for trying to scam...

How To Secure Your Dream Career —Funmilola Kehinde

G4G: Career women as enablers for girls’ empowerment, self esteem

A woman got sentenced to 5 years for trying to scam...

Abdulrazaq Arafat - December 11, 2019
0
A woman got sentenced to 5 years for trying to scam a wedding website twice (CNN)A woman in California was injured so badly that she...